With a fresh, new modern look that reflects the historic nature of the Macon campus, the new Willet Science Center will offer access for students to do more research as well as enjoy the classes and spaces for study groups.

Structural issues with the brick and block on the exterior of the building were discovered once the project was started. The scope of work was expanded to include making the exterior structurally sound and reskinning the building with brick and EIFS to match existing new construction on the campus. Additional scope included a full exterior hardscape renovation, three large curtain storefront walls in the existing building, and a renovation of a 200-seat lecture hall on the ground floor.

We have created a better, more effective, longer lasting building than was the case before.
James Netherton, Executive Vice President for Administration and Finance, Mercer University

The project earned a First Place Build Georgia Award from the Associated General Contractors of Georgia. 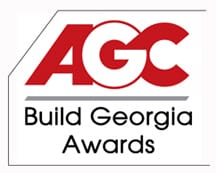